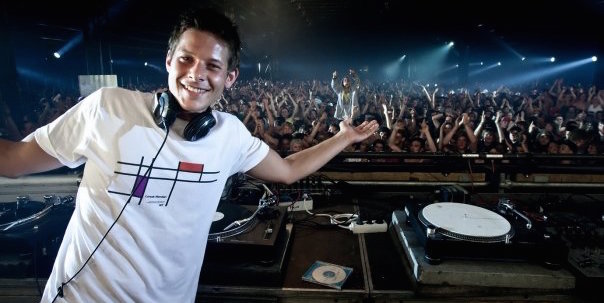 We’re starting Xmas a little early this year with a huge party at our favourite Belgian venue, Trix! We’ll be bringing over London Elektricity, Fred V & Grafix, Etherwood, Logistics, Maduk, Keeno and be joined by homegrown talents Diego Torres and the mighty Murdock! As the founder of Rampage, Murdock is responsible for some of the biggest parties across Europe as well as a successful DJ in his own right having toured the festival circuit for many years stepping up to decks at Tomorrowland, Pukkelpop and Laundry Day to name a few.

Hey Murdock! So let’s start at the beginning, how did you get into drum & bass?

I was playing hip-hop instrumentals at double speed, mixing ‘em with electro and house and found out some guys in the UK were doing to same thing, only a lot better. I think Shy FX’s ‘Original Nuttah’ must have been one of the first tracks that got me really excited.

You’ve been a big part of bringing D+B to the Belgian airwaves, how did you first get into working in radio?

Studio Brussel is the national radio station similar to the UK’s Radio 1 and was particularly cutting edge in the late nineties when they started playing techno and other electronic music. Head honcho Jan van Biesen invited me to play a guest set a few times and when he decided drum & bass needed its own weekly show he asked me to take care of it.

Then there’s the events! Do you remember the first drum & bass show that you ever put on?

The first shows my friends and I put on were a mix of electro, Detroit techno funk, Miami bass, jungle and drum & bass and it was always full house. Every night we did was bigger than the one before and pretty soon I started doing all night drum & bass parties. It’s been a rollercoaster ever since.

Any highlights over the years?  What’s been your favourite show to put on?

Probably the shows I put on when I first started out were the ones that I have the fondest memories of because most of the people there were friends or became friends and all we did was party. When the shows got bigger I had to act more professional and that is exciting in other ways but meanwhile my party antics suffered heavily.

A highlight for me is the first big move for Rampage, a show with UKF at Antwerp’s Lotto Arena for 6000 people. That felt totally out of this world. Another huge night was the Netsky album release party when he first signed to Hospital. He was at his first peak of popularity, still within a 100% drum & bass environment and the crowd were insane that night. The love for this local star-in-the-making was just overflowing.

So how did Rampage begin?

I used to do parties called Breakdown at a venue in Hasselt. When the guy that was running the venue moved to another one in Antwerp he asked me to do D+B nights at this new place and I jumped on it. That was 7 or 8 years ago. The first night had Sub Focus headlining and Danny Byrd and Original Sin supporting.

I am very proud to say that Rampage is now the biggest indoor drum & bass and dubstep party in the world! It started out in a 1200 capacity venue, then included a second room and gathered close to 2000 people, then moved to Lotto Arena to host three 6000-capacity editions and last year we set up shop in Sportpaleis for the first time and now it’s a 15,000 capacity bass music party with people from over 30 countries visiting. It was just one step at a time and finding the right people to work with. Or better yet, getting them to find me!

Moving on to the music, what made you start Radar Records and Broken Music?

I needed a vehicle for a mix-CD I wanted to do back in 2010 or so. Regular record companies weren’t hip to drum & bass yet, so I wanted to do it all by myself. At the same time, there were a few exclusive tracks by Netsky on that CD and it looked like no other label were going to release them. And they were gems! So I set up Radar to release the CD, we put two tracks by Netsky on a 12” vinyl and off we went.

I focused Radar on Belgian talent, but when dubstep popped up a lot of kids started sending me dubstep music or even stuff that didn’t fit on Radar. So I set up Broken Music just for anything electronic and danceable by homegrown producers. There have been some stunning releases on Broken Music but it’s been dormant for a while now. Quite a few of the guys have moved on to brighter pastures and that’s cool, because the main idea is to be a stepping stone for young talent.

Which artists in Belgium (or elsewhere) are catching your attention at the moment?

In Belgium the main guy right now is Doctrine, aka Hush, who does crazy neurofunk but super funky future bass stuff as well. The guy is so incredibly talented. I have no idea where he’s going to end up, but he’s definitely going places.

Nexus & Tight is another bright talent, who is devoted to the deep, rolling liquid drum & bass Logistics and Netsky used to make, circa 2006-2010 and his tracks just nail that vibe. I have high hopes for T & Sugar – I released an EP of theirs on Radar and I think ‘Get Mad’ is still one of the most outstanding bits of bass music I’ve heard in the past year.

You’ve been representing for drum & bass for nearly two decades now! What’s changed in the scene during that time?

So much has changed. The first 10 years or so of my career I was DJing in squats, warehouses, basements and other dodgy and/or illegal sites. Now it’s huge stages with giant LED screens, lasers and lights in front of thousands of people. Drum & bass even though the dominant form of it was very experimental throughout the 90s and even a big part of the 00s. That side of D+B is still here but mainly drum & bass, these days, has to conform to a number of parameters in order to make it into the other music that’s being made. Plus, the taste of the general public has changed a lot over the years and this is reflected on what D+B producers come up with in the studio.

One of my tracks is going to be out on V Recordings’ ‘Planet V’ compilation and will also be featured on a forthcoming Hospital Records compilation. I have a single dropping on Viper in January and a tune on the 20 Years of CIA album plus some more music that’s going to pop up left and right. The new Rampage Anthem, which I am working on with Doctrine is already sounding super tasty as well. And of course there’s a Rampage 2016 which has a monstrous line-up and will hopefully be another super dope night.

And finally, what makes a Hospitality show different from any other drum & bass night?

No label other than has so consistently nurtured its identity and this reflects on its crowd. Every album they’ve done, every sub-label or compilation has always been about Hospital, doctors, patients…and I think that the people attending Hospitality are so drenched in that vibe that they feel extremely connected to what’s going on on stage.

Also because its usually all Hospital artists the music is very coherent and they’re able to take the punters on an eight hour trip through music. I played one in London eight or so years ago and Rampage brought Hospital over three years ago. I’m happy they’re going to be back in town and that I’m a part of it.

Tickets are on sale now for Hospitality Belgium at Trix on 19th December.