Perks Of The Park: Back To The Roots 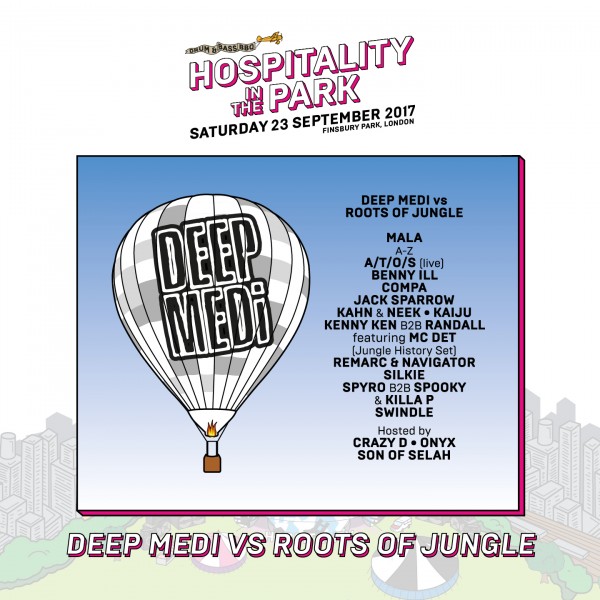 We at Hospital Records recognise the importance of bridging gaps between music. This year at Hospitality in the Park we are delighted to announce a brand new stage, Deep Medi vs Roots of Jungle. We will be welcoming Mala’s Deep Medi Musik to the Park to bring the best in 140 beats, and having celebrated their 10th anniversary last year, I’m sure it will be one heck of a party. Alongside them, a few well-known faces from the roots of jungle music will be taking to the stage, all of which have over 20 years producing and DJing jungle music for the masses.

Where would dubstep be without Mala? The big boss of Deep Medi has been one of the most influential artists ever in the UK underground scene. As one half of Digital Mystikz (DMZ) alongside Coki, Mala has been banging out tune after tune since the early days of dubstep and has access to one of the most extensive back catalogues in dubstep. Even if you aren’t big into your 140 music, this is a legend not to miss.

A/T/O/S have released two killer albums now on Deep Medi, the most recent Outboxed being released in February to very high acclaim. Beautifully blending soulful vocals with minimalistic yet masterful production, the duo could draw comparisons to Submotion Orchestra but with their own unique flavour.

One of the faces of Horsepower Productions, Benny Ill has been involved in the dubstep music scene since its beginnings. With multiple releases on Deep Medi as well as heavyweight label Tempa, Benny will be bringing his extensive experience and knowhow to the Deep Medi vs Roots of Jungle stage.

A perfect mix between grime and dubstep. If you haven’t heard Compa’s newest single No Hype with Footsie of Newham Generals, the link is below and is a must listen. Early on, his drum and bass roots quickly lent to the discovery of dubstep where he has been making waves ever since. He joins us at Hospitality in the Park, having been touring North America and Europe over the summer to packed shows.

The act I’m most excited to see. Following numerous releases on Deep Medi and Tectonic, Leeds resident Jack Sparrow comes to Hospitality in the Park having recently started his own label Navy Cut. For years, he has been one of the most featured names in dubstep and has a yearly residency at Outlook Festival, where he is able to show off his own unique flavour on dubstep.

Bristol’s finest underground musicians. Every EP released under their Bandulu label is hot property, selling out in minutes and for good reason. The duo combine a variety of styles over the 140 spectrum, producing grime, dubstep and under their Gorgon Sound alias, strictly dubplate and vinyl dub and soundsytem music.

The duo have been big names in the dubstep game for some time now. Their bass-heavy track Justice has undoubtedly been played at every underground dancefloor around the country, propelling them into the spotlight of 140 music. It’s fair to say these two love a sub-bass, and for good reason!

Names that need no introduction, two of the most iconic artists in the history of jungle and drum & bass will be gracing the Deep Medi vs Roots of Jungle stage, joined by the legend that is MC Det. Kenny Ken and Randall have over 50 years between them spent in the industry, and are for sure some of the most influential DJs at this year’s festival.

We are excited to bring ‘King of the Amen’ Remarc alongside old school junglist Navigator to the park, for what will definitely be a showcase in the true zest of jungle music. There is no doubt that you will hear the best in jungle music with these two.

One of London’s finest dubstep DJs who has been part of the Deep Medi crew for some time, giving a colourful taste of dubstep to the label’s back catalogue. Silkie is a true representation of what the dubstep sound of London really is.

If you haven’t head Sir Spyro’s release Topper Top with Killa P released on Deep Medi Musik last year, then where have you been? Undoubtedly THE grime/dubstep track of the last year it has been spun round more times than Kylie Minogue and which has bridged the gap beautifully between the two genres. Joining Sir Spyro on stage is the underground legend that is Spooky, one of the most important faces and best producers in the grime scene.

Swindle has to be one of the most creative and masterful producers of our generation, dabbling in the world of funk, dubstep and electronica to name a few. His experimental sound has led to attention from all corners of the world, making his name one of the most recognisable in the underground circuit.

In short, the fine folks ready to come and unleash hell on the Deep Medi Vs Roots of Jungle stage are nothing short of legendary. To make sure you witness the sickness and feel the pressure you’re gonna have to come along to Hospitality In The Park. Ticket’s are rolling out the door like there’s no tomorrow so be quick!