Perks Of The Park: FABRICLIVE 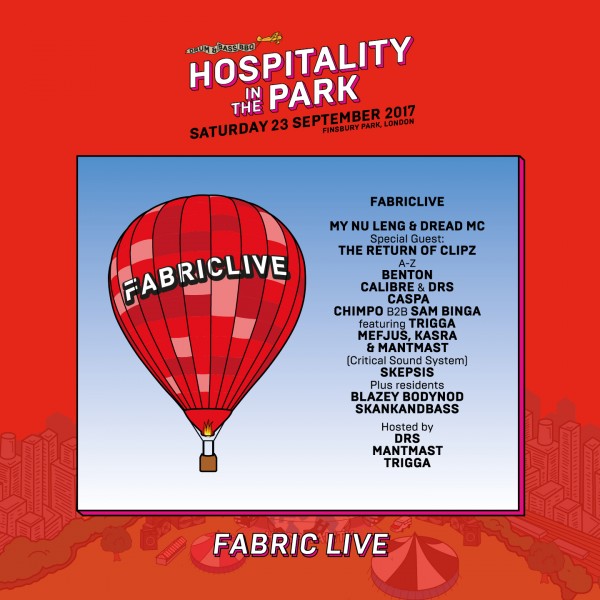 Any visitor to London has to spend at least one night boogying down at the iconic Fabric nightclub. To revel in the recent salvation of Fabric from the brink of permanent closure by the powers above, we couldn’t think of anyone better to host a stage at one of the nations biggest parties. Helping us to celebrate such an iconic club, are some of the finest underground music artists, many of whom have been blessed enough to release a legendary FABRICLIVE compilation. Welcome back, FABRICLIVE.

Now we’ve listened to what you had to say last year and we know that sound quality is a huge part of the whole festival experience. Taking that on board, We’ve implemented special measures, and Fabric will now be bringing their room two Pioneer Pro Audio sound system for a bass overload that will make the FABRICLIVE stage naughtier than Theresa May running through a field of wheat.

The duo behind FABRICLIVE.86 and another Bristolian pairing smashing the underground scene not just in the UK but worldwide. Drawing influences from across the electronic music spectrum it is hard to pinpoint their sound to a specific genre, so expect a diverse set but guarantees of heavy drops and huge bass. Dread MC joins the pair onstage and having experienced their previous sets together, it will definitely be one of the parties of the summer.

Hospital are thrilled to announce that the legendary Clipz will be returning for Hospitality in the Park. Having found commercial success under alias Redlight, Clipz is going back to his DnB and jungle roots to help us celebrate this year’s Hospitality in the Park. This set will be only one of two appearances for Clipz this summer, so this is one not to be missed.

When I think of Benton, I can think of no better person who fits the dark and minimal 140 sound. High profile releases on Loefah’s Swamp81 label, travel to any city with a thriving underground music scene and his name will definitely pop up on a flyer somewhere.

A drum & bass legend straight outta Belfast and curator of FABRICLIVE.68, Calibre has been a key player in the scene for over 20 years now. His own Signature Recordings has released some of the finest DnB, complete with beautiful melodic patterns and an unmistakeable sound. No doubt he is one of the biggest names in drum and bass. Jumping on stage with Calibre is one of our favourite MCs: DRS. You will not be disappointed.

One of dubstep’s biggest names, who could ever forget his remix of TC’s Where’s My Money? King of the wobble and FABRICLIVE.37 representative Caspa is making his Hospitality in the Park debut this year. Having had a high-flying career touring all corners of the world and having music featured on Hollywood blockbusters and remixing everyone from Depeche Mode to Deadmau5 and Ludacris, he comes back to his hometown of London for what will be a set to cherish on the FABRICLIVE stage.

Famous for his part in Manchester crew Levelz and unmistakeable voice, Chimpo heading behind the decks to be joined by top-knot sporting Bristol DJ Sam Binga. Trigga MC will be taking to the stage for a set that is sure to be packed to the brim with bouncey bass-heavy half-time.

Having smashed their set last year with Emperor, Critical boss and FABRICLIVE.62 selector Kasra is joined yet again by Austrian neuro heavyweight and my personal favourite Mefjus, for what will certainly be one of the heaviest sets at the park this year. These two neuro icons take to the FABRICLIVE stage having just released their Decyfer / Conversion EP together.

Undoubtedly the new face of the UK bass scene. Skepsis has helped revitalise bassline music in recent months and let’s be honest, he will be one of the filthiest acts you will see all day. At only 21, this is a DJ at just the start of his career and with support from the likes of Rinse FM, is destined for great things.

Our first FABRICLIVE resident is big name around Bristol, Blazey Bodynod. A true pioneer of bass music in the South West’s biggest city and one of the most respected promoters on the circuit, anyone whose been to a Bodynod show knows the score.

With well over 60,000 subscribers on YouTube and a dedicated following on social media where he routinely promotes the best new DnB, Skankandbass is the second resident of our FABRICLIVE stage. He’s got some special stuff in store for the Park believe us…

It’s without a doubt that every single one of this exalted figures of bass music will be bringing the fire to the FABRICLIVE stage, and with a huge Pioneer sound system, what more could you ask for. So if you haven’t got one already, grab yourself a ticket so you don’t suffer severe FOMO.