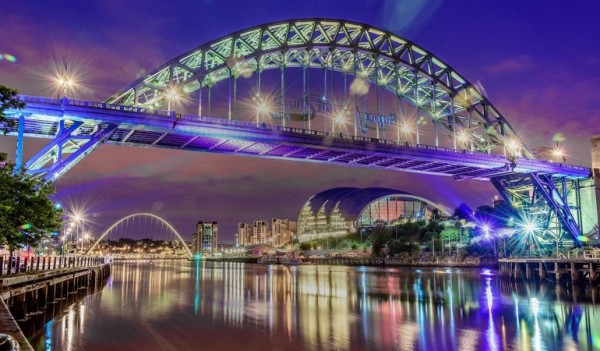 Football, ale, an incredible bridge, and a sixty-six-foot tall steel angel may be the first things that spring to mind when one envisages the Toon. But this northern city is home to more than these stereotypical yet alluring regional charms. A city of Newcastle’s scale is bound to be home to some incredible nightlife, surely? Ones assumptions would be correct. Not only is the jewel of the deep north a melting pot of culture, drum & bass in this city remains as strong as it does in its southern counterparts.

Last year Hospitality teamed up with Rub a Dub Dub to dish out vibes by the barrel at Digital in Times Square with typical Hospital flair. High Contrast led the vanguard and was joined with fellow brothers in arms Reso, Keeno, Nu:Tone & Lowqui. It was a massacre. With the dance well and truly destroyed, it seemed only fitting to return to decimate a brand spanking new venue: The Boiler Shop. This cosy, you guessed it, boiler shop, has emerged like a steam phoenix from its boiling remnants into one of Newcastles most exciting new venues.

The generals leading the Hospital forces this time around will be Danny Byrd, Dimension, DJ Hazard and S.P.Y with support from Danox & Haxby, and hosting duties left to Texas & Aems. Powered by the Concept10 crew who have been putting on all manner of incredible events, we will also be joined by Dilate as well as previous partners in crime Ruba Dub Dub, this is set to be an outstanding affair. But what makes this event extra special is the new venue. Although a refurbished boiler shop may not sound like the grandest of spaces, it sits in the historical Stephenson Quarter, which has just undergone an incredible redevelopment. The venue itself is a fraction shy of 200 years old and was instrumental in the Stephenson Co. Locomotive, the first company built specifically for constructing railways. However, during the last few years such a region has flowered into a hub of all things arts, food and culture. Providing a home for numerous musical events, this authentic slice of urban Newcastle continues to play a key role in the cities eco-system. Provider of many a musical style to the northern hordes, this venue continues to push innovation forward whilst respecting the rustic heritage of the building.

It takes serious boots on the ground and a strong work ethic to keep cities thriving with the Ds and the Bs, and Newcastle is no different. There have been some incredible promoters keeping the scene alive in the north east with nights such as Dilate and Lively Up running all scale of things in Newcastle, and Cranked Sounds holding things down just down the road in Middlesborough.

Lively Up have been bringing the rough, tough and dangerusssssss vibes in Newcastle for a number of years now. Showcasing a broad and eclectic range of music including Dub & Reggae, Hip Hop, Oldskool but most importantly, Jungle and D&B. Having brought down some true musical legends including David Rodigan, Goldie, Rodney P, Benny Page, Vandal, Congo Natty and The Four Owls. Their versatility rivalled only by their quality. Typically favouring the World Headquarters nightclub as their stomping ground, the Lively Up crew boast the friendliest crowd to be found anywhere in the North, and dish out only the finest underground beats.

As mentioned earlier, Dilate (Hospitals prior partners in crime) are also some of Newcastles prominent beat connoisseurs. Typically catering to the up front & jump up crowd whilst dabbling in ragga d&b and jungle, this crew of die-hard bass enthusiasts have been key players in maintaining a prosperous underground bass scene in Newcastle. Showcasing artists from Hazard & Guv to Nicky Blackmarket and DJ EZ, variety remains the spice of life up north and it seems party-goers have been spoilt for choice with these excellent promoters.

Newcastle has also played host to some of the most established D&B figureheads in the game. One of Playaz most esteemed veterans Original Sin, one-half infamous outfit G-Dub, hail from Newcastle. This is where he met his Generation Dub partner in crime, fellow Toon dweller Jake Carter, aka Sub Zero. Undeniably a pair of Jump Ups biggest names, these two have been at the top of their respective games for years and, they show no sign of slowing down.

Having met one another at college studying Music Technology, it took but half a year for the pair to realise their ambition of doing things their own way, casting institutionalised education aside and forging their own destiny from their home studio. Harnessing the basics they already had acquired through their brief stint at college. Adam Tindal (Original Sin) already had a somewhat impressive reputation as one of the foremost local DJs in the area. Running his own Area 51 events and using his DJing as a medium to test his production. The pair quickly earned the respect of their D&B peers and soon enough Generation Dub were snapped up by DJ SS Reinforced & Reformed labels. The rest, as they say, is history. Having made tunes for Playaz & Ganja amongst a horde of others, these two jump up veterans have a drum & bass history that few can match, and have very much earned the accolades that have been bestowed upon them.

As has been made abundantly clear, there is no shortage of D&B heritage in Newcastle, and the scene remains as strong as ever through the works of brilliant promoters and producers alike. This energy and enthusiasm will be coming direct to our next show on the 11th of March. You can get involved by following the links below and we look forward to seeing you inna di dance!

GET TICKETS // JOIN THE EVENT